Women, children and old people demonstrated in front of UNMIS camp in Kauda demanding departure of mostly Egiptian soldiers contingent from their besieged and day-by-day bombarded land because UNMIS is not doing anything to protect their families.

»We do not trust you!« expressed women speakers one after another in front of heavy armoured Egiptian and chines men under blue helmets.

»Talodi, Buram, Um Dorein, Sardiba, Kowalib … you never come to see killed victims. What are you reporting at all and to whom?«

»You are spying for Omar Bashir and Mohamad Haroun. You must go with them to ICC …«

UNMIS first refused demonstrators to enter, demanding only one speaker. The crowd pushed to join her, but soldiers pushed the door back. Crowd then breaked the lock. For a few moments situation was very intense, men in uniforms loaded guns and started armoured vehicle. Then Nuba women with children in their hands got quite angry. After that everybody was allowed to enter UNMIS compound and express emotions freely.

After about an hour demonstrators peacefully left to go home, leaving behind papers with slogans: »Go Egiptians, we do not need you!« »Antonovs and MiGs = Death for children!« »Let me go to my school!« among others.

One hour later Antonov bomber appeared in the sky. It crossed the sky causing a great panic, that this is now revenge for what they had done this morning. At the moment we are still waiting the return of the bomber and if it attacks we will report where the bombs exploded. And send photos and footage of new deaths among the most innocent people on the Earth… 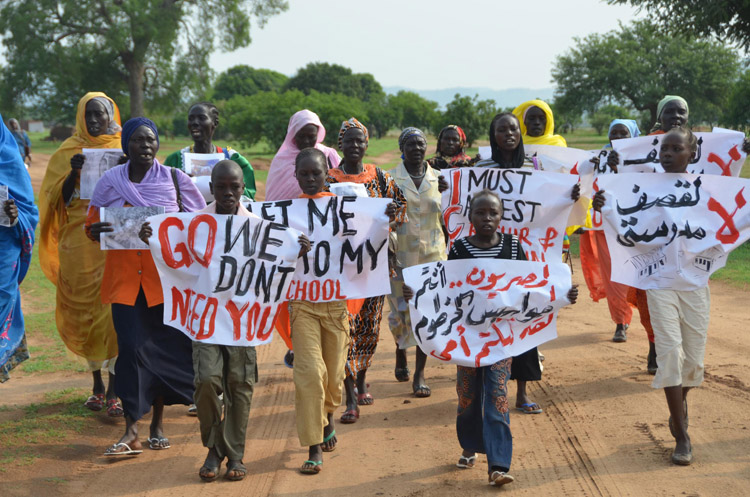